Preparation of the soil

At the beginning of spring, the wine grower prepares the soil of his vineyard and lightens the earth, buries weeds and fertilizers.

This makes it possible for micro-organisms to develop, allowing to get a rich and fertile soil.
Grass also grows on every other vineyard row. In this way, erosion is limited and the vineyards do not become too vigorous. 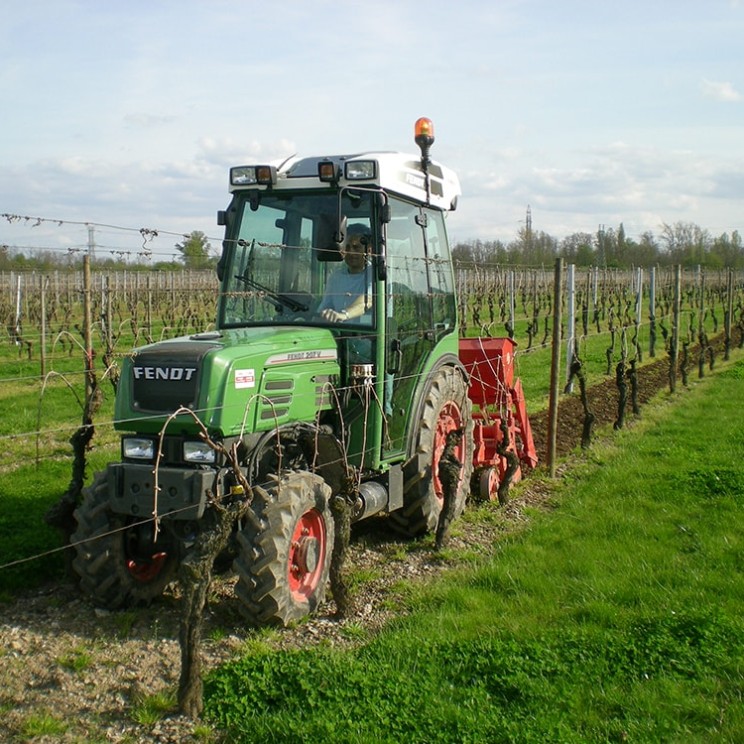 As soon as the temperature becomes milder, buds appear: it is the beginning of the growth cycle.

In April and May, the growth is relatively slow, leaves emerge and start growing.

At the beginning of June, the wine grower straightens up the young branches between 2 wires of the trellis. This is called trellising.

It is also important to watch out for the different pests and diseases that could affect the plants. 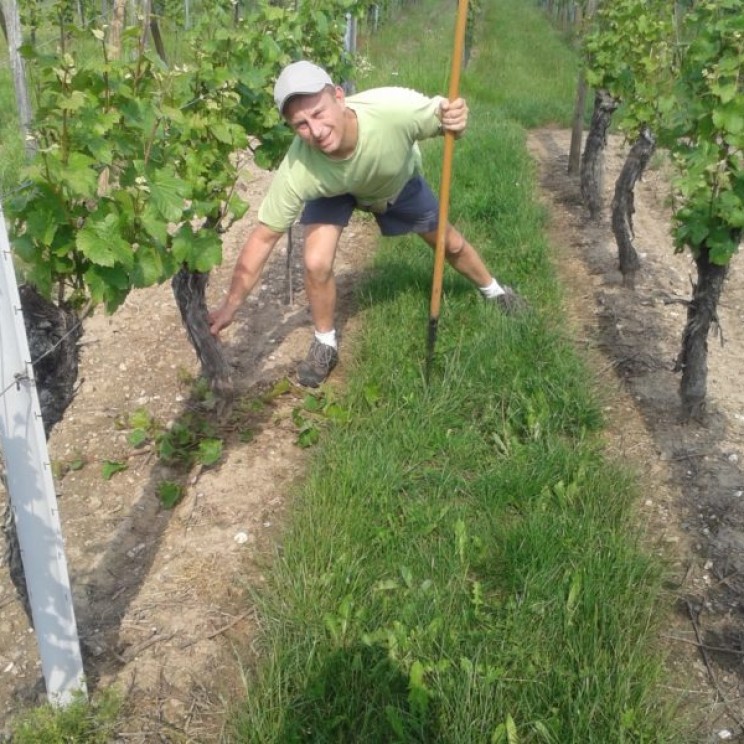 As soon as the temperatures become favourable, the buds start to open: this is the beginning of the vegetative cycle.

In April and May, growth is fairly slow and the vegetative surface is established.

At the beginning of June, the winegrower is busy raising the young shoots between 2 wires: this is the trellising

It is also necessary to be vigilant to intervene against the various vine diseases or parasites that may develop on the plant. 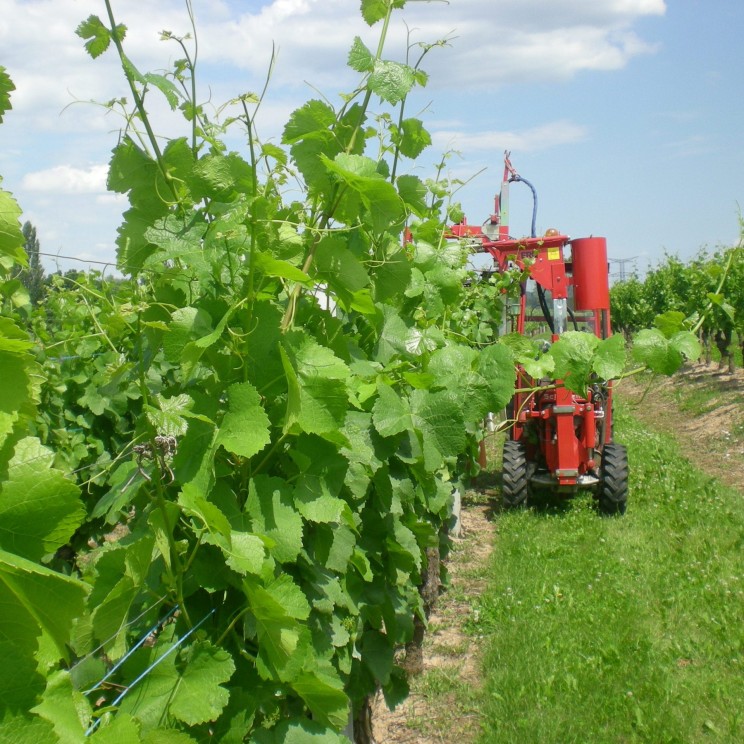 The aim of trellising is to support the vegetation according to the pruning method chosen, to develop the exposed leaf surface, to avoid crowding the vegetation and to ensure the exposure and aeration of the grapes.

This technique allows the grapes to see the sun better because the branches are raised, which facilitates photosynthesis and helps the grapes ripen later. 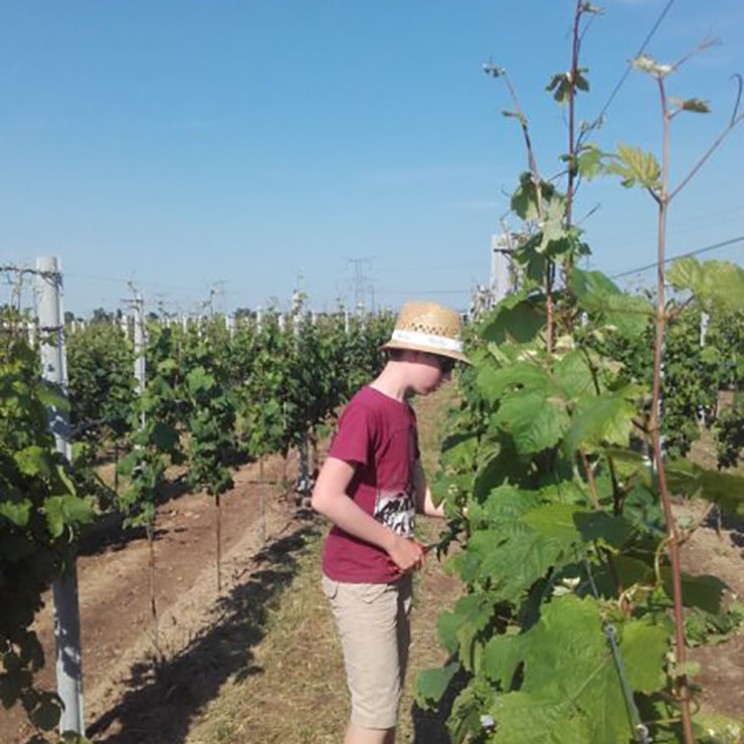 In Alsace, flowering time is around 20th June. Flower clusters, that are to become the future bunches, loose their cap, thus uncovering the pistils and flowering. 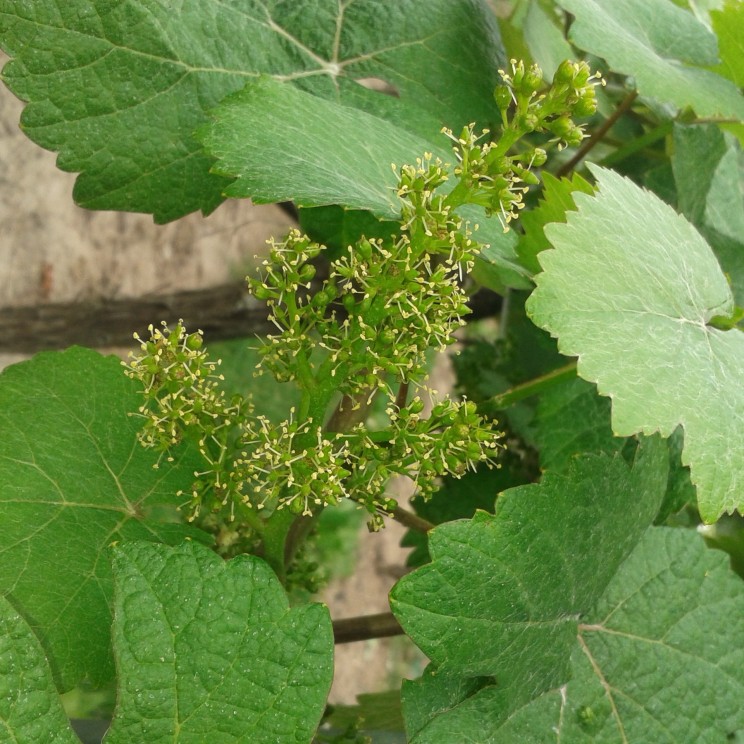 Shoot thinning is necessary to allow enough light and air to reach the vines.

It consists in cutting the end of the canes at the top and on the side, so that buds
can grow and young leaves are produced, which accelerates photosynthesis.
Depending on how vigorous the vines are, it might be necessary to do this several times. 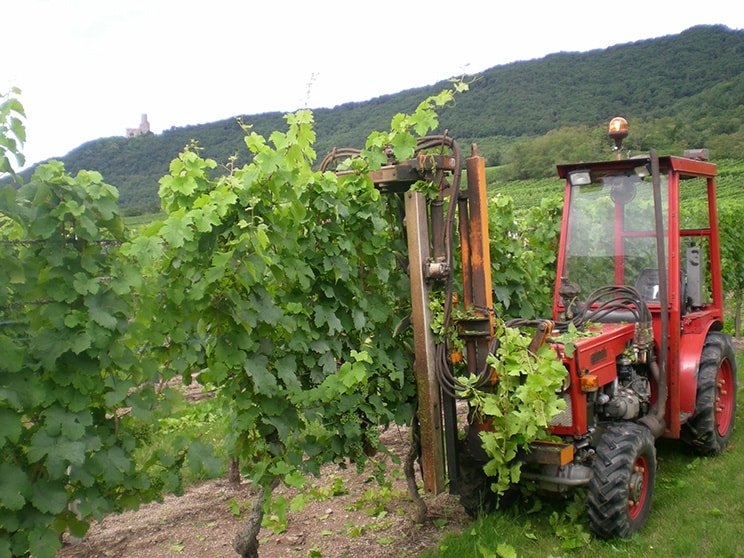 At the end of July, the work of the wine grower will consist in green harvesting. Grape surplus is removed on certain vines ( Muscat , Pinot Gris, Gewurztraminer, Pinot Noir).

This is a very important step, because in this way, the remaining grapes will be sweeter and their aromatic and organoleptical qualities will be increased. 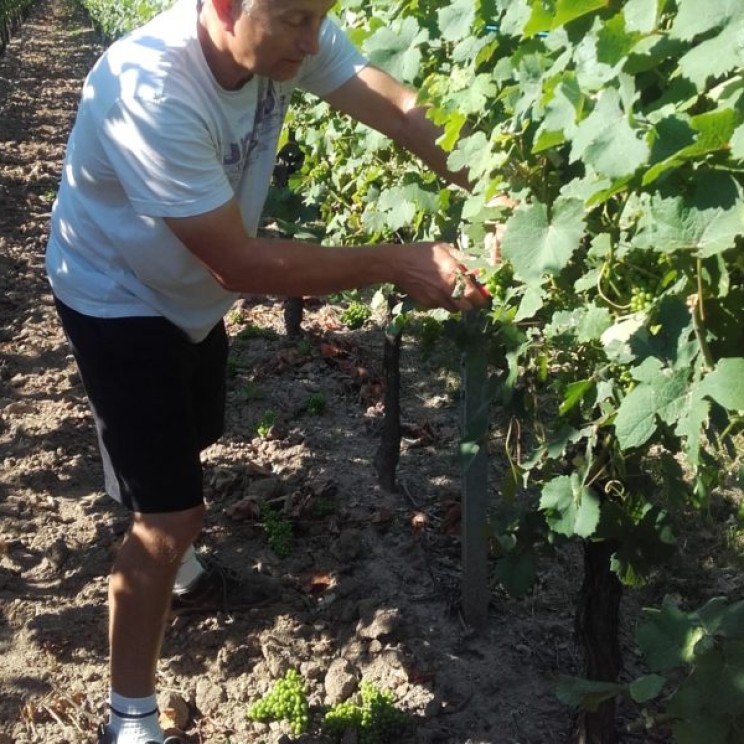 Around the middle of August, the berries become softer and get coloured. At this stage, the grapes turn from green to their mature state: it is called the veraison. The quantity of sugar increases, just as the aromatic potential of the grapes does. 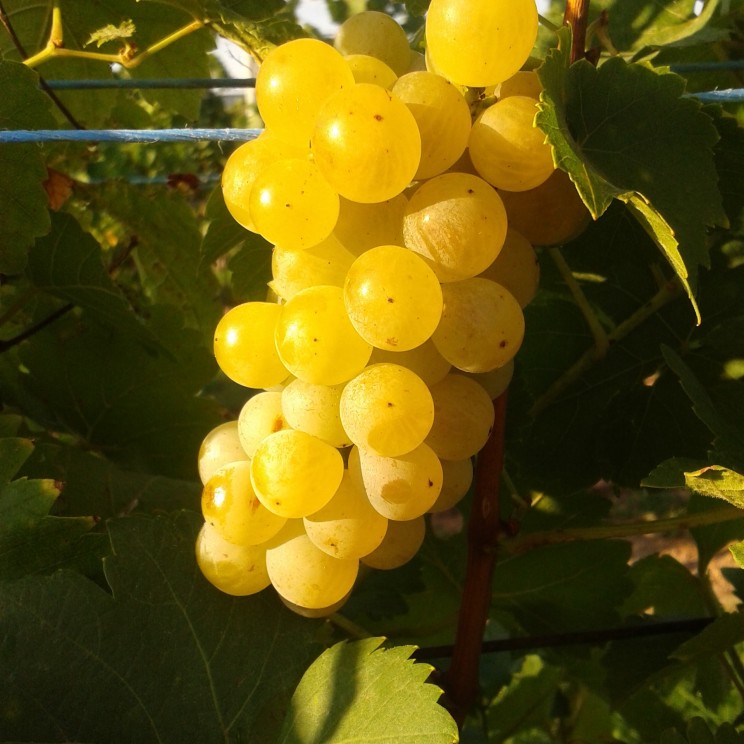 As the harvest approaches, sugar is measured in the berries to estimate the ripeness of the grapes. This is usually done with a refractometer. 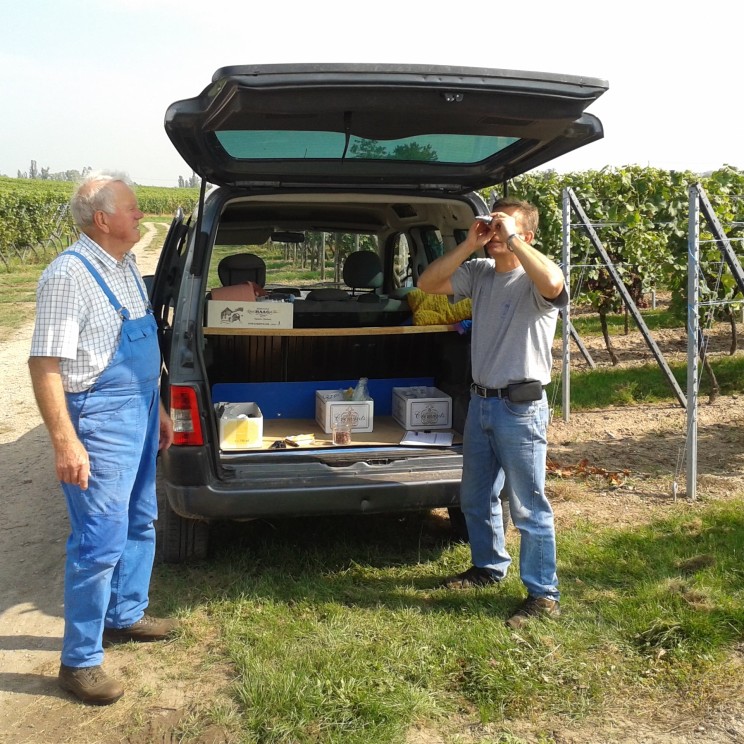 In September, our hopes begin to take shape. The late autumn sun fills the bunches with sugar and the grapes ripen.

Experts gather to decide when harvesting has to start and what is to be done at what moment: the harvest will start with the Pinot family, then Muscat and Sylvaner, and then Gewurztraminer.

The last one to be harvested will be the Riesling. 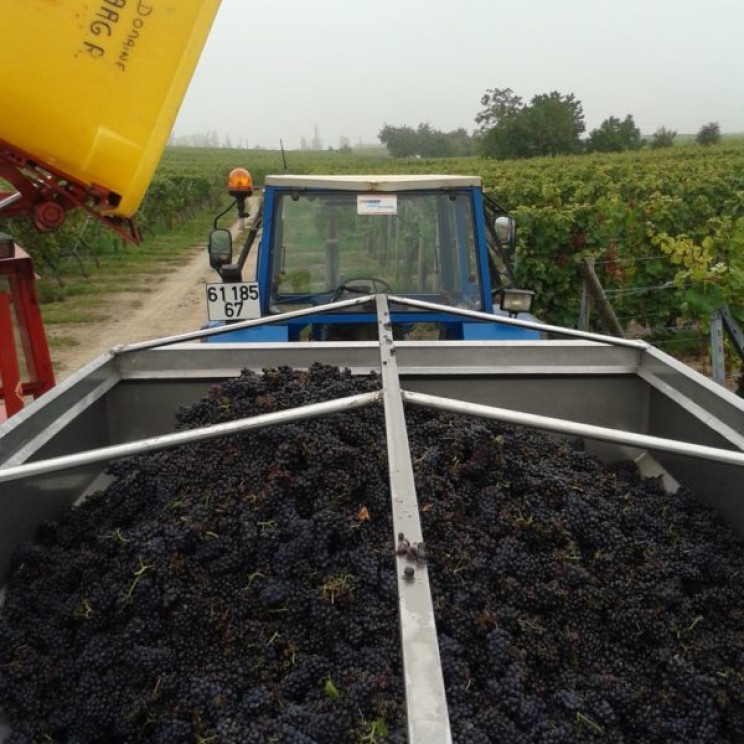 In November, autumn colours cover the vineyard. One cycle comes to an end, another one is starting. 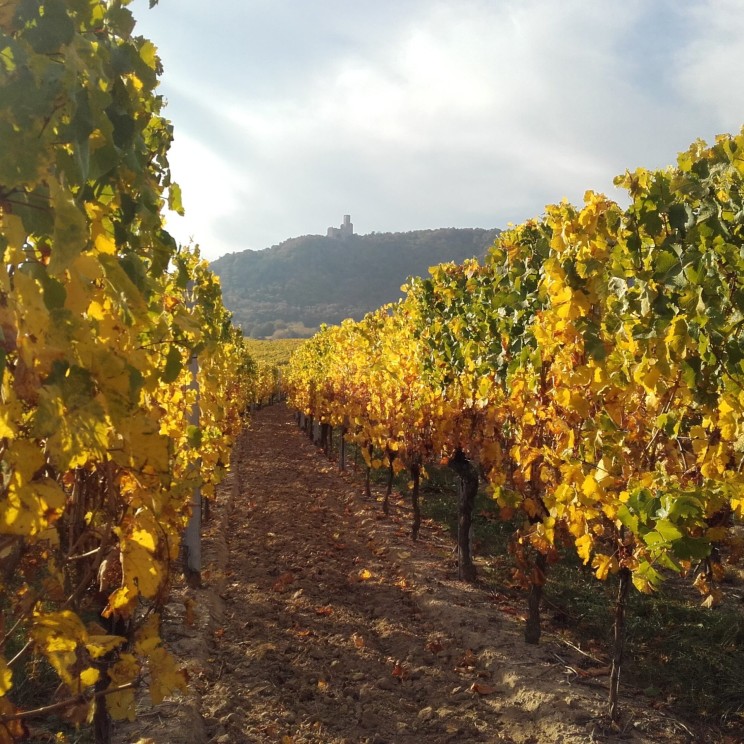 The establishment of green manure can have several advantages:

improvement of the soil structure: the mechanical action of the roots of the green manure allows to loosen the soil of the inter-row and to improve the penetration of water and air.
contribution of organic matter and improvement of biological activity: green manures stimulate the biological activity of the soil in a rapid and intense way during their growth and especially after burial.
protection against erosion and runoff: green manures, like permanent grass cover, have a dual action of protecting the soil and improving water infiltration capacity. They thus reduce runoff and fight against erosion.
Green manure is a combination of several plants:
Oats
Rye
Forage pea
Clover
Chinese radish 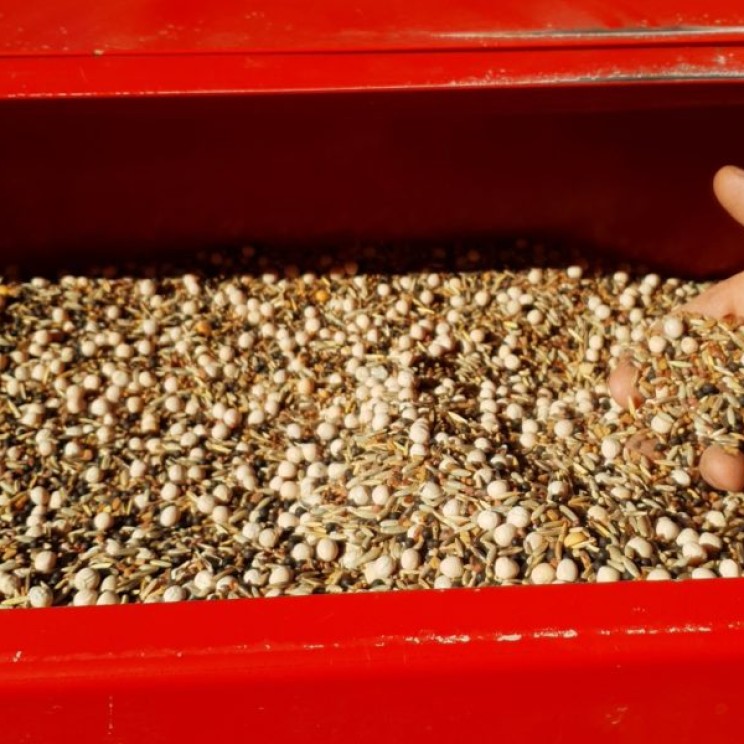 Pruning begins right after leaves have fallen, that is to say between the end of November and the beginning of December. It takes place during nearly all the winter period.

The aim is to regenerate the wood, to preserve the shape of the stock and its youth: the quality of the following harvest depends on the decisions taken by the wine grower at this stage.
The pruning system used in Alsace is the double “Guyot”. 2 fruiting canes are kept, as well as 1 spur that is kept for security’s sake and for the following year. 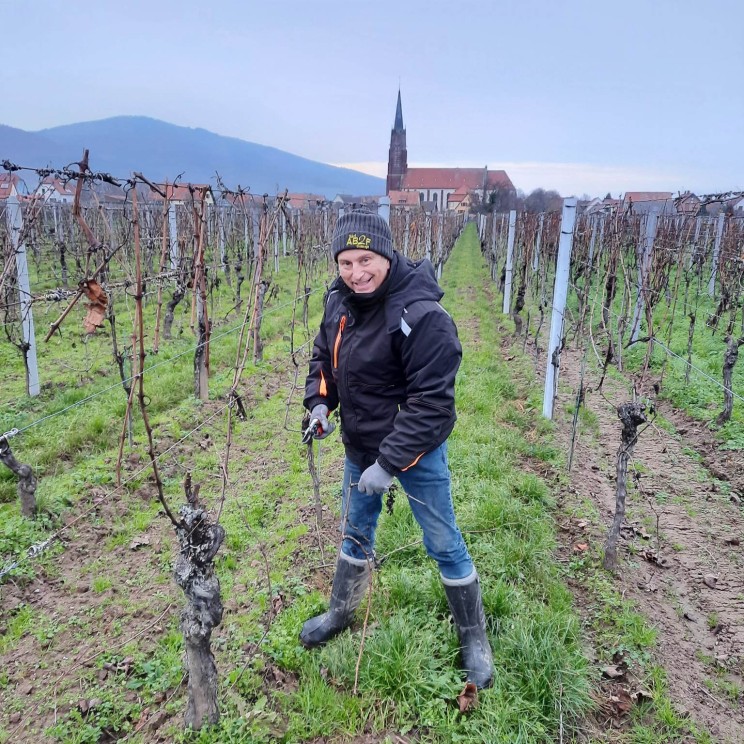 At the beginning of February, the wine grower will proceed to position the canes.

This consists in binding both canes in an arched way on the different wires in order to make them steady and unable to move, especially because of the wind.

It is important to do this before the sap starts flowing, in order not to damage the buds. 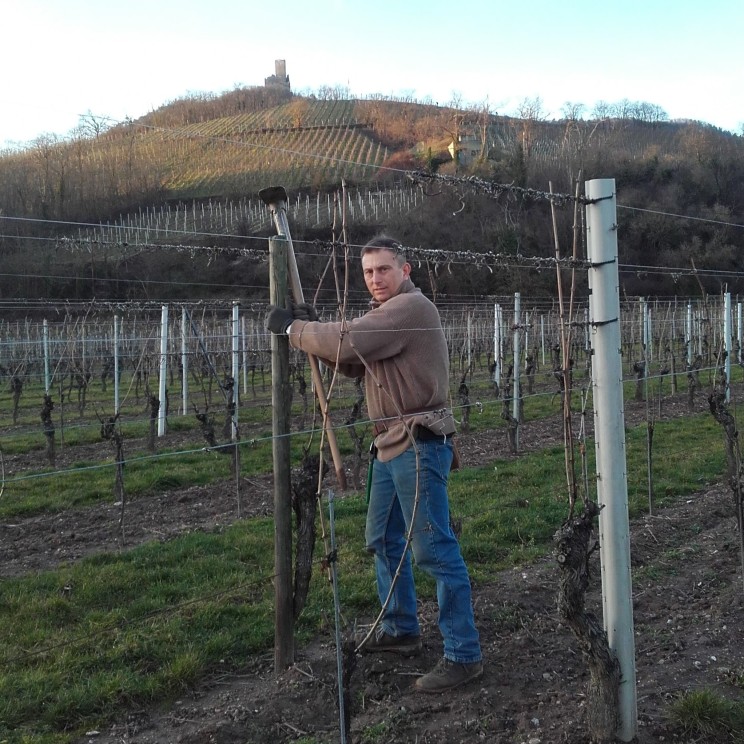 At the beginning of February, the winegrower proceeds with the tying. This operation consists of tying the 2 shoots in an arched way to the different wires so that they are stable and cannot move, mainly due to the wind.
It is important to do this operation before the sap rises, to avoid destroying the buds. 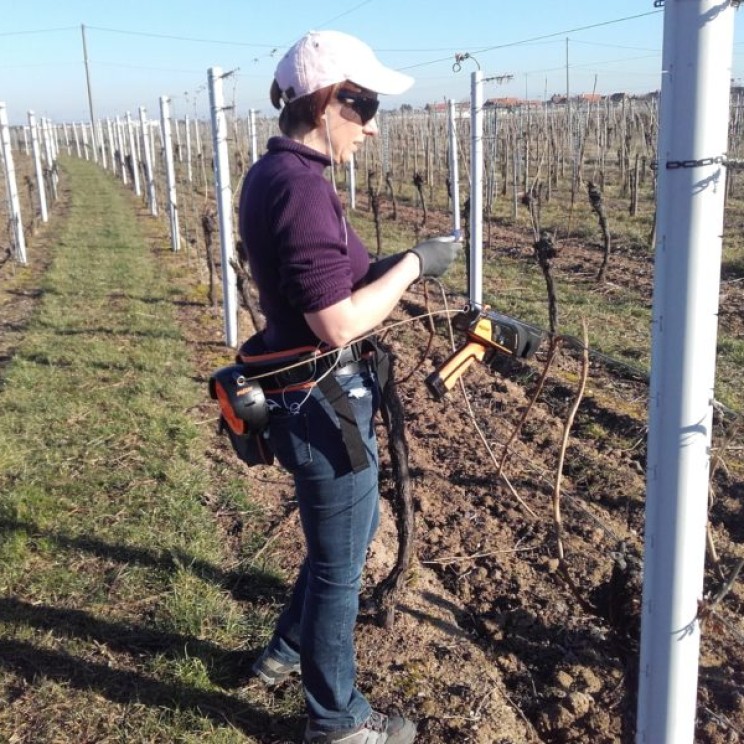